Third cycle of events in UGM

In this cycle of events UGM wanted to focus on the experience of women artists in the visual art scene. They invited artists from their international exhibition No Looking Back, Okay to speak about the challenges that the artists face in the preliminary male ran world.  UGM hosted worldly renowned female artists in a lively exchange on art practices, ideas and working methods. They were presenting some of the most interesting visual artists in Europe today, that, among other, work in the field of collective memory, politicized landscapes, constructing histories and belonging within their very distinct art practices, ranging from drawing series, architectural experiments, manipulated photography, video and featured film and installation. Artist talks were curated by Simona Vidmar.

Mounira Al Solh (b. in 1978 in Lebanon; lives and works in Beirut and Amsterdam) grew up in Lebanon and in Syria, and currently lives in the Netherlands and in Lebanon. Al Solh’s art practice embraces drawing, painting, embroidery, performative gestures, video, and video installations. Irony and self-reflectivity are central strategies for her work, which explores feminist issues, tracks patterns of microhistory, is socially engaged, and can be political and escapist all at once. Al Solh studied painting at the Lebanese University in Beirut and Fine Arts at the Gerrit Rietveld Academy in Amsterdam. She was also Research Resident at the Rijksakademie in Amsterdam. Her work has been shown in Documenta 14, Athens/Kassel, at the 2015 Venice Biennial curated by Okwui Enwezor, and as part of the Lebanese Pavilion in 2007. She also had several solo shows, at Sfeir-Semler Gallery, Beirut; Kunsthalle Lissabon, Lisbon; Art in General, New York; CCA, Glasgow; and the Stedelijk Museum Bureau, Amsterdam, among others. Group shows include The New Museum’s Triennial, New York; Homeworks, Beirut; Haus der Kunst, Munich; Manifesta 8, Murcia, Spain; The Guild Art Gallery, Mumbai; KW Institute for Contemporary Art, Berlin and the 11th Istanbul Biennial. In 2015, she has been shortlisted for the Abraaj Group Art Prize in Dubai. She was nominated for the Volkskrant Award in the Netherlands in 2009 and won the Uriôt Prize at the Rijksakademie in 2007.

Tanja Lažetić (b. 1967 in Slovenia; lives and works in Ljubljana) graduated in architecture from the University of Ljubljana in 1994. She works in the fields of photography, video, performance, ceramics and artist’s book. Her work has been featured in exhibitions in Moderna galerija, Ljublajna; The International Centre of Graphic Arts, Ljubljana; Neuer Berliner Kunstverein; Real Academia de Bellas Artes de San Fernando, Madrid; Museum Brandhorst; Munich; Festival der Regionen, Austria; Gagosian Gallery, Paris, Beverly Hills, New York. In 2015, she won the Bronze Award at the Nanjing International Art Festival and the 2016 Jakopič Award.

Nika Autor (b. 1982 in Slovenia; lives and works in Ljubljana) graduated from the Academy of Fine Arts in Ljubljana and finished her PhD by practice at the Academy of Fine Arts in Vienna. Her practice is primarily based on experimental videos and documentary films, film essays, newsreels and video installations. Her work focuses on the constructions of collective memory and the politics of memory. Nika represented Slovenia at the Venice Biennale 2017 and is the winner of the Found Footage Award at the Rotterdam International Film Festival 2018.

Nataša Berk (1978) enrolled at the Vienna Academy of Fine Arts after finishing high school for Design and Photography, and attained her Master’s degree there in 2005. She attended a curatorial course at the SCCA (Institute of Contemporary Art) in Ljubljana. As a multipotentialite she is not interested in any particular genre and works in almost all areas of art. In 2009, she developed the project “Čajnašop”, through which she (illegally) sold smaller, funny and strange art products. In 2013 she created a small gallery “0.04m³” and in 2015, together with the artist Guillaume Stagnaro, she created an even smaller mobile gallery “0,02m³”, where she works as a curator and a selector. She has exhibited at Central House of Artists (Moscow), Wiener Art Foundation (Vienna), MFRU+KIBLIX (Maribor), Pixxelpoint Festival (Nova gorica), P74 (Ljubljana), Viennabiennale_010 (Vienna), and elsewhere. 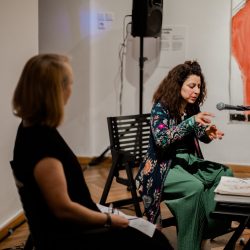 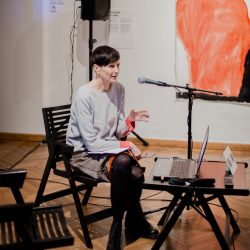 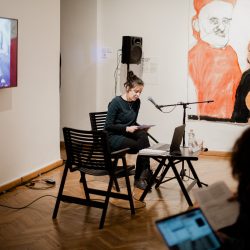 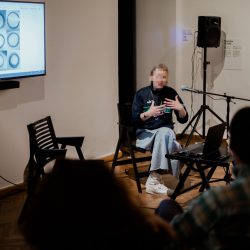 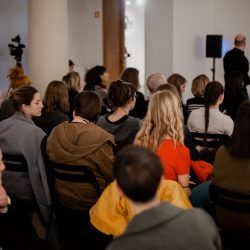 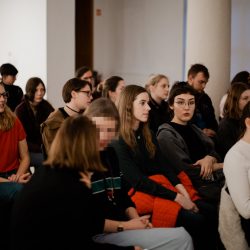