Katja Gauriloff (b. 1972) is a Skolt Sámi film director and screenwriter who lives and works in Lapland. She is also a co-owner of the Oktober Production Company. Her documentary films A Shout into the Wind, Canned Dreams and Kaisa’s Enchanted Forest have been awarded the State Quality Support for cinema productions in Finland. Her films has been screened and awarded at various festivals around the world. Canned Dreams and Kaisa’s Enchanted Forest have been both part of the Berlinale festival selection. Kaisa’s Enchanted Forest opened the Berlinale NATIVe section in 2017. Katja Gauriloff has been awarded for the Finnish National Film Awards (Jussi) for the best documentary film in 2016. Her first debut fiction feature Baby Jane which is based on a novel by award winning author Sofi Oksanen, was premiered 2019. Katja Gauriloff is currently working on her second fiction feature Je’vida which will be the first Skolt Sámi language feature film in history.

Katja’s motivation for being a Womarts Ambassador:

As a Womarts Ambassador I have the opportunity to tell about my art not only on a personal level but also as a representation of my people and their history and current situation. Sámi people are evaluated to be the most researched native people in the world. After the centuries long external examination of my people, the medium of filmmaking has proven to be the most successful way for us to take back ownership our stories, to tell about us in our own way. Being a native storyteller is meaningful to me – especially now when there is genuine interest in the stories of different native peoples in the world. It is important to me to be able to help Sámi films to be elevated from the margins to become films for bigger audiences.

Katja Gauriloff was invited to be Ambassador by Wom@rts partner WIFT Finland. 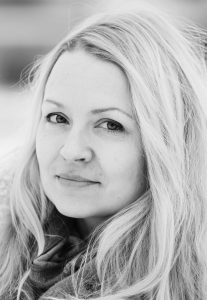 As a Womarts Ambassador I have the opportunity to tell about my art not only on a personal level but also as a representation of my people and their history and current situation.