Anca Damian studied at the Academy of Theatre and Film Arts where she obtained a diploma in Cinematography and a Doctor’s degree in Arts, Cinema and Media. After graduating, she worked as a director, screenwriter and producer for several documentaries on art related topics, and also as a director of photography for two long feature films, and many other documentaries and shorts.

In 2008, she made her first long feature film as a director, screenwriter and co-producer, “Crossing Dates” (2008), a layered story that made Jay Weissberg write in Variety “keep your eyes on Anca Damian”. The film was selected in international film festivals like Busan, Chicago, Goa, Cottbus, Goteborg and Rome.

In 2012, her second feature as Director, screenwriter and producer, “Crulic – The Path to Beyond”, came to the international attention with great impact. Both the autobiographic narration and the experimental form ensured the Kafkaesque movie favour of many festival selectors – Locarno, Telluride, BFI London Film Festival, Annecy, Busan, New Directors/New Films in New York among others 250 festivals. The movie got more than 35 international prizes, among which the Cristal for Best Feature Film Award in Annecy.

In 2013, her next feature, “A Very Unsettled Summer” was an English-speaking film with international cast: Kim Bodnia, Jamie Sives and Ana Ularu. An innovative look upon a Pirandellian love triangle was brought in this Romanian, Swedish, Czech and UK coproduction.

In 2015, her second animated feature “The Magic Mountain” continues to establish Anca Damian’s visual innovation style combined with strong topics. The story of a Don Quixote in Afghanistan is also the second film of a trilogy that started with Crulic. It had the world premiere in Annecy, and the international premiere in Karlovy Vary IFF international competition. It was selected in more than 60 festivals, such as San Sebastian, Leipzig, Amiens, Busan and won 11 international prizes. She was also the first to receive the Audentia Award in 2016 offered by Eurimages, which intends to celebrate women who have had the courage to make that choice of pursuing a career in film directing, by giving their work greater visibility and inspiring other women to follow in their footsteps.

In 2018, her most recent live action feature “Moon Hotel Kabul” premiered in Warsaw IFF, where it received the Best Director accolade, while her latest short animated feature “The Call” travelled the world in over 50 international festivals, among which Annecy, Toronto, Sundance, Hong Kong, and won 9 international prizes.

She was awarded the Mirada International Award in Madrid International Film Festival 2018 – New Directors Platform, for being “a total creator, a true landmark and an unchallenged inspiration for new directors.” – as stated by the organisers.

This year Anca did a competition to give a scholarship to a young women director in Romania. They made a presentation of the project, with the finalists. You can read about it here:  FemArt Film Fest – booklet web (2)

Anca Damian was invited to be Ambassador by Wom@rts partner GrandAngoulême. 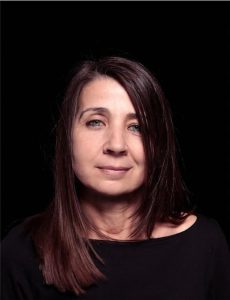