Meet the Master
Vivian Ostrovsky, experimental filmmaker
3 December 2020, at 6 pm
Centre Audiovisuel Simone de Beauvoir, Paris, France
Le Son d’un regard ( The Sound of a Sight)
Vivian Ostrovsky met Nataša Petrešin-Bachelez & Nicole Fernández Ferrerand participated to a Q&A with the audience. Conversation was about her work, her way of filming and editing, highlighted by excerpts from her films and installations.
Filmmaker born in New York in 1945, Vivian Ostrovsky spent her childhood in Rio de Janeiro, then pursued graduate studies in Paris in psychology and cinema. In the 1970s, she co-founded Ciné-Femmes International, an organization dedicated to the distribution of women’s films. Since 1980 Vivian Ostrovsky has directed more than twenty films. Her films exploit the theme of displacement, and are situated, according to Yann Beauvais, between “diary films” and “collage films”. Her work has been shown in numerous retrospectives and exhibitions in museums and festivals around the world.Nataša Petrešin-Bachelez is an interdependent curator, editor and writer.
Among the exhibitions she curated are Contour Biennale 9: Coltan as Cotton (2019, Mechelen), Defiant Muses: Delphine Seyrig and the Feminist Video Collectives in France (1970s-1980s) at LaM, Lille and Museum Reina Sofia, Madrid (2019, with Giovanna Zapperi),  Not Fully Human, Not Human At All, organized by KADIST, Paris (2017-2020).
She is chief editor of Versopolis Review, and was chief editor of L’Internationale Online (2014-2017).
She is co-founder of the Initiative for practices and visions of radical care, with Elena Sorokina. 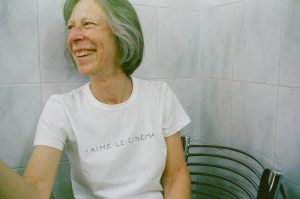